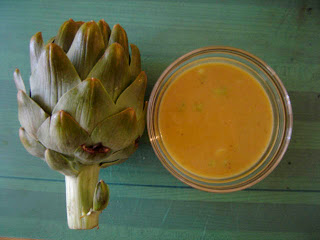 I love artichokes.  Ever since I was little my favorite answer to "what's for dinner" included artichokes.  My mom always steamed them and served them with drawn butter.  There's something so simple and yet somewhat decadent about eating nothing but the artichoke and pure butter.  The only other thing I can think of my parents eating this way is lobster.  I've also had stuffed artichokes at various Italian restaurants, but these days my favorite way to eat an artichoke is Perla Meyers's Artichokes with Curried Ginger-Lemon Vinaigrette.  Yes, they're that good.  They're so good, in fact, that when I want my favorite vegetarian friend to come over, all I have to do is mention these artichokes and he won't make any excuses.
The recipe comes from Ms. Meyers's book Spur of the Moment Cook: Spontaneous and Flavorful Meals for the busiest Days of the Week.  Although the topic sounds somewhat hackneyed in the age of Rachel Ray and the 5 minute meal, Spur of the Moment Cook is not your typical dump-some-canned-things-in-a-pan type of speedy cookbook.  Meyers studied baking and confections in Switzerland and Vienna and received a degree from Le Cordon Bleu.  She seems to be most interested in the kind of peasant European cooking that inspired the whole California Cuisine craze lead by Alice Waters.  Two of Meyers's other well-known cookbooks are titled The Seasonal Kitchen: A Return to Fresh Foods and Peasant Kitchen: A Return to Simple, Hearty Food if that gives any indication of her culinary interests. In most of her books, Spur of the Moment included, Meyers focuses on preparing fresh, whole foods simply and in a way that highlights their natural qualities. 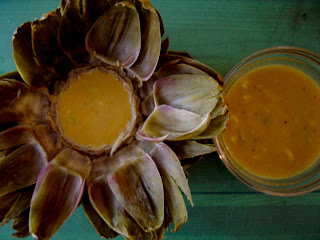 Anyway, back to these artichokes.  It's an easy recipe, and the real star is the amazing Curried Ginger-Lemon Vinaigrette that gets poured into the bowl made from scooping the choke out of the heart. Once you dig out all the vinaigrette with the leaves, you're left with a perfectly dressed artichoke heart to enjoy.   Although Ms. Meyers's recipe includes an option for anchovy fillets, I simply left them out.  It also calls for 1 teaspoon of lightly beaten egg yolk, but if you're uncomfortable with raw eggs, just leave it out as well.
I like how the artichoke looks like a sunflower once it's been filled.
Artichokes with Curried Ginger-Lemon Vinaigrette
For 4 large artichokes
Vinaigrette:
1 lemon, cut in half, one half juiced
1 teaspoon lightly beaten egg yolk
1 teaspoon curry powder
* One 1-inch piece of fresh ginger, peeled and passed through a garlic press
1 1/2 tablespoons sherry vinegar
2 teaspoons Dijon mustard
1 large garlic clove, also pressed
3/4 cup olive oil
2 tablespoons finely mined scallions or chives (I used three scallions)
Salt and pepper
Get some salted water boiling and cook the artichokes along with half of the lemon for around 25 minutes or until the artichoke is done.  For the vinaigrette, combine the first 7 ingredients in a small bowl and whisk to combine.  As you wisk begin to pour the oil in slowly until all of it is emulsified. Stir in the scallions and season with salt and pepper.
Once the artichokes are done cooking, place them in a colander and blanch them under to cold water until they are cool enough to handle.  Spread the artichoke leaves carefully, and let it cool until you can handle it.  Once cool, use a grapefruit spoon to dig out the fuzzy choke in the center, which you can discard.  Pour 1/4 of the vinaigrette into the heart where the choke used to be.
* I found this to be more like juicing the ginger through the press because the fibers didn't really break down.
* * *
I'm sending this post in to Lisa of Lisa's Kitchen for the "No Croutons Required" event.  This month's theme is "dressing" so I thought this recipe would be perfect.  Hope she likes it!
Email Post
Labels: Perla Meyers Spur of the Moment Cook

Lisa Turner said…
Indeed, I do like this recipe. Your dressing sounds lovely. I rarely eat artichokes, but I would be rushing to your house if invited to eat this. Thank you so much for participating in our event.
August 20, 2008 at 3:41 AM

Ann Dziemianowicz said…
Mmm...I admire your goal. Are you inviting guests? A shame not to share! Hey, if you are an artichoke lover and want a break from the hot stove have you tried Artichoke Basille Pizza on 328 E. 14th Street? A teeny pizza joint, maybe the size of your kitchen!
August 20, 2008 at 4:17 AM