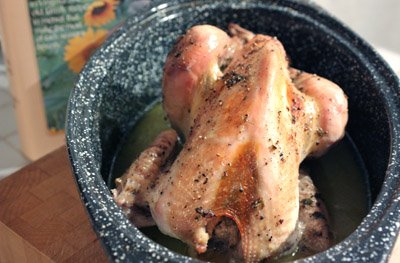 Cooking Books readers, so nice to meet you all, I'm Lisa from Lisa is Cooking.  Thank you so much, Andrea, for inviting me over for a guest post.  Andrea and I both have an interest in cookbooks new and old, food writing, and food  history, so I was invited here today to tell you about what I've been reading and cooking lately. 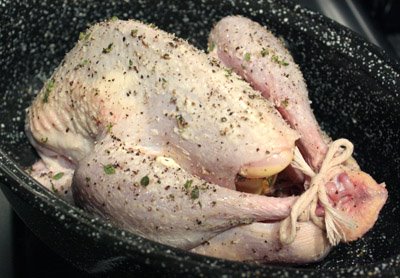 In an effort to accept the change of seasons, I decided to turn to the Fall chapter of The Taste of Country Cooking by Edna Lewis.  This classic, originally published in 1976, is divided into sections by season.  Edna Lewis wrote eloquently about her childhood memories growing up in Freetown, Virginia and the events and farm activities that took place each season.  She wrote of the pride in community and the cooperative farming efforts, and she wrote about the food.  For each chapter, she writes about typical menus that were served for special events at that time of year. During the first weekend in November, the horse race in Montpelier was the occasion for a Race Day Picnic which included cold roast pheasant and lentil and scallion salad.  In writing the recipes for these dishes, she includes suggestions for serving this as a hot meal in addition to the instructions for a cold picnic.  Unfortunately, I didn't have a horse race to attend this weekend, so I roasted a pheasant and served it warm. 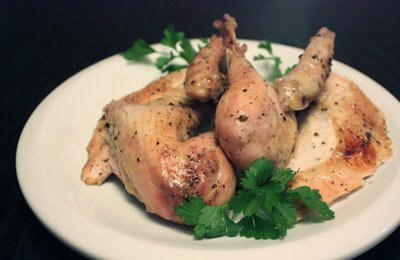 This was my first foray into pheasant roasting, and I was warned that the meat could be dry.  However, the warning came from someone who didn't realize that the recipe I was following called for half a stick of butter to be inserted into the cavity of the bird before roasting and additional basting every 15 minutes.  The cooking time was anywhere from 90 to 120 minutes, and my two pound pheasant reached 160 degrees in one and a half hours.  I wasn't sure if the flavor would be a little like duck or more like chicken, but I was told it would be very mild.  The house smelled like Thanksgiving, or my grandmother's house on any random weekend, while it roasted.  To me, it tasted more like turkey than any other fowl I've tried.  It was very milk, the meet was very light and it was really delicious.  Considering that the flavor has
essentially been bread out of chicken these days, it was a joy to eat this bird with a noticeable and really pleasing taste.  With a price point right at or just under that of natural chicken, I'll definitely cook pheasant again.  In fact, I'm already imagining smoked pheasant enchiladas with mole poblano, but I digress. 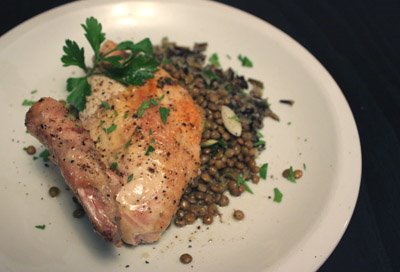 The little bird rested while I whisked hot water into the pan drippings over high heat and let it reduce by about half.  This sauce was strained and served on the side.  I also prepared the lentil scallion salad, the steamed wild rice from the Emancipation Day Dinner menu, and the crispy biscuits from the Hunting Season Dinner menu.  The wild rice steamed for the same amount of time that the pheasant was in the oven, and pan drippings from a roasted fowl were added to the rice, so it worked out very well as a side dish. 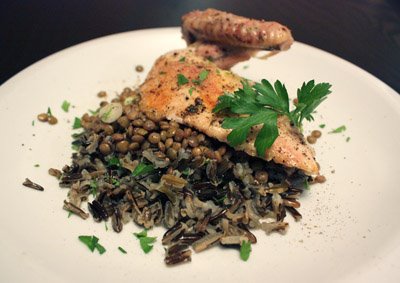 Edna Lewis wrote that fall was always looked upon with mixed feelings because their summer visitors had left town, and they had to return to school.  But, the calves were brought home from their summer community pasturing, and hunting season began.  I can understand the uncertainty about fall.  I don't relish the reduced amount of daylight or the increase in traffic when school is in session, but the holidays and time spent with family and friends that get their start in the fall and continue into winter make it a pretty great time of year.
Email Post
Labels: Off the Shelf

Sam said…
Pheasant is a rare treat for me but it is delicious, I'm looking out for them now the pheasant season has started, they're not that easy to find where I live.

Andrea said…
Thank you for such a great post, Lisa! I'd ready about Edna Lewis in a feature article in one of the big food magazines (can't remember which one) and it's such a treat to watch you prepare so a unique recipe. I love all the background information on Lewis and the dish, as well.
October 16, 2008 at 7:33 PM

Snooky doodle said…
wow what a nice meal. I looks so good. I ve never tried roasting pheasants I only roasted chicken so far,
October 16, 2008 at 10:33 PM

jenniferhoiyin said…
This chicken makes me hungry, and those tarts look fantastic!

By the way, you were a winner in the Pierre Herme giveaway. Email me your address so I can send you your goodies. :)

Anonymous said…
I should have mentioned in the post that I was able to get a frozen pheasant at Whole Foods by requesting it 24 hours in advance.

The book is great because there's so much info about Lewis' childhood, but the recipes are somewhat updated in places. For instance, olive oil shows up a time or two.
October 17, 2008 at 1:21 AM

Anonymous said…
Looks so delicious. What kind of pot is that? looks like stone or something.
October 19, 2008 at 5:37 AM

Anonymous said…
The little roasting pan is enamel coated aluminum. I bought it years ago, and it was the perfect size for a pheasant.
October 19, 2008 at 4:16 PM

Bailey said…
Hello -
I am a filmmaker in Atlanta. I read your latest blog with the mention of Edna Lewis and her recipes.

I just wanted to let you know I produced a 21 minute documentary about Miss Edna Lewis and its viewable in its entirety on Internet at a Gourmet Magazine website:

My documentary is called Fried Chicken and Sweet Potato Pie.

My website, http://bbarash.com/bb_friedchicken.htm has more information about the film and the story of Miss Lewis.