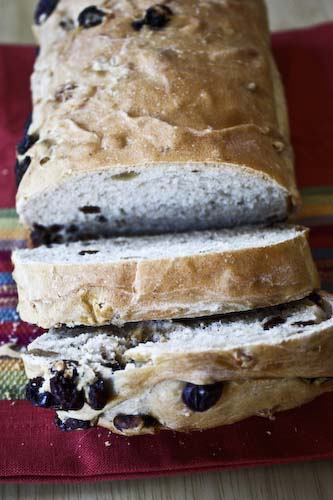 It's noticeably colder here, now.  Although honestly it's been too warm for November.  The trees in Central Park are still clinging to their leaves, determined until the first real frost forces them to let go.  And in the morning, the air actually seems crisp, even fresh, (even frigid?) which is something of an anachronism in a big city.  The end of November always sneaks up, pretending at first to fall in line with October.  But in the end, it's always a lie and suddenly winter has slipped in through the back door.  I don't think I'm ever ready for winter.  In Colorado, at least, winter means skiing and you don't even have to go without sunshine.  New York always seems to forget that it's a pedestrian city in the winter, and plows build up snowdrifts on the sidewalks so large that they could support armies of barracked down snow-ball fighters.  Ugh. 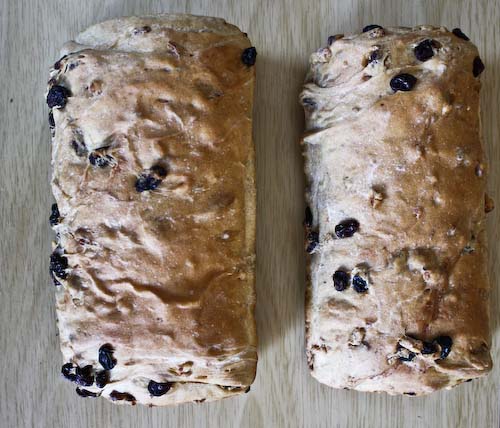 But then, there's the benefit of turning on the oven for hours without driving up the temperature of the apartment to unbearable heights.  Which is always nice for bread making.  Unlike the last experiment in cinnamon-raisin, this isn't a swirl.  The cinnamon is baked right into the bread, which is dotted with raisins and walnuts.  It comes from Peter Reinhart's The Bread Baker's Apprentice and although good, I think I prefer Dorrie's recipe to be perfectly honest.  But I'm never one to pass up a slice of warm cinnamon-raisin slathered with peanut butter, especially on a blistery day. 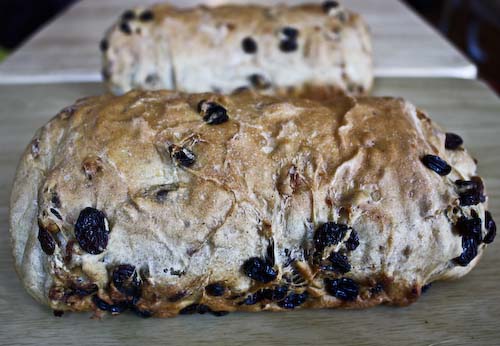 Cinnamon Raisin Walnut Bread
Makes 2 loaves, slightly adapted from Peter Reinhart
Dry Ingredients:
3 1/2 cups unbleached bread flour
4 teaspoons granulated sugar
1 1/4 teaspoons salt
1 1/4 teaspoons ground cinnamon
Wet Ingredients:
2 teaspoons active dry yeast (bloomed in 1/4 cup warm water)
1 large egg, beaten slightly
2 tablespoons shortening at room temperature
1/2 cup whole milk, at room temperature
1/2 cup water at room temperature
Extras:
1 1/2 cups raisins
1 cup chopped walnuts
Stir the dry ingredients together in the bowl of an electric mixer.  Add the wet ingredients and stir on low speed with the paddle attachment until the ingredients form a ball.
Switch to the dough hook and mix on medium speed for 6-8 minutes.  Add more flour if necessary so that the dough forms a nice ball, tacky, but not sticky.  In the last two minutes of mixing, add in the raisins and walnuts.  The dough should pass the windowpane test (which means that when you stretch it, it thins enough to become translucent to light as though you were looking through a windowpane).
Oil a large bowl and place the dough in it.  Roll the dough so that it's coated with oil.  Ferment at room temperature for 2 hours.  The dough should double in size.
Divide the dough into 2 even (or in my case, slightly uneven) pieces and form them into loaves.  To do this, spread the dough out into a flattened rectangle about 5x8 inches.  Starting from a short side, roll the dough up and pinch the seam together.  Place each piece of dough in an oiled 8 1/2 x 4 1/2 " loaf pan, seam side down.  Lightly mist the bread with more oil.  Cover loosely with plastic wrap and proof for 90 minutes until the loaves are about doubled in size.
In an oven preheated to 350, with the rack positioned in the middle, place the loaf pans on a baking sheet.  The pans should not touch.  Bake for 20 minutes, then rotate the pans and bake for about another 20 minutes.  Remove the bread from the pans and cool on a cooling rack.  Enjoy!
*     *     *
I'm sending this bread to Susan of Wild Yeast for next week's YeastSpotting!
Email Post
Labels: Peter Reinhart The Bread Baker's Apprentice

Dana Treat said…
We just had a week or so of 60 degrees plus weather - it made me think it wasn't November. But now the rain and wind are back, just in time for Thanksgiving. I'm with you, I like the coziness of having something delicious in the oven. I can only imagine the smell in your apartment!
November 20, 2008 at 11:35 PM

Esi said…
I love the smells of cinnamon baking. Luckily it is finally cooling down enough for me to get to bake. By the way, I read your post below on attending the Prop 8 rally. Thanks so much for helping the cause and hopefully our Supreme Court will overturn this ridiculous prop.
November 21, 2008 at 1:40 AM

veggie belly said…
Oh..the joy of baking when its chilly outside! And the smell of cinnamon in the house..your gorgeous bread translates into all things cozy and comforting :)
November 21, 2008 at 2:25 AM

Anonymous said…
Our cool weather here in California isn't as cool as yours but I still look forward to it as great baking weather. Another lovely bread from you!
November 22, 2008 at 4:41 AM

Pattern Patisserie said…
This looks like just the kind of bread I should be baking here in Maine on a really cold (17F) snowy day like today...winds howling, landscape like (what do I mean LIKE...it is) a frozen wasteland...oh for the smell of this baking in the oven right now. Warm thoughts to you, Patricia
November 23, 2008 at 3:53 AM

Andrea said…
Snooky, they did smell wonderful! Thanks!

Dana, don't rub it in! It's so cold here right now my face hurts!

Esi, well as I said above it's so cold here I don't even want to go outside. But I'm a wuss about cold!

Veggie Belly, Thanks! You're too sweet!

Kevin, I love the smell of baking bread!

Patricia, geeze, that's some intense winter weather! I can't say I envy you, but it's not much warmer here right now. Warm wishes back to you!
November 23, 2008 at 8:19 PM