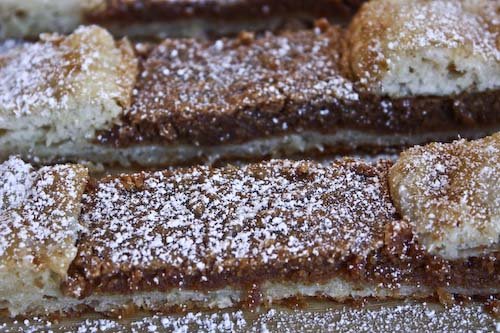 I like the idea of homemade puff pastry, or croissant dough, or any of the other variations that require making endless layers of buttery pastry.  The process of rolling, folding, chilling, waiting, rolling, folding... just writing out the steps makes for a lovely rhythmic chant, as soothing as homemade puff pastry should be.  Soothing, of course, is only one way to took at it.  It is also, to my mind, a monumental undertaking.  I mean, all of that rolling, folding, chilling, waiting...  And pastry is notoriously temperamental.  Requiring the perfect chill so the butter doesn't begin to leach out from between your hard-won layers. 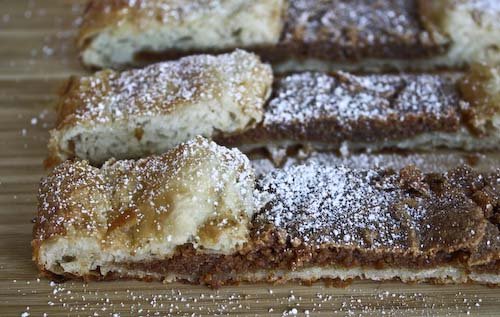 I love the idea.  But so far, I have been disappointed by the reality.  About a year ago, before I started this blog, my first attempt at a puff pastry was in the form of a flourless chocolate espresso tart.  In the cookbook's photo, the crust was crumbly, moist looking, light and airy.  In reality, it was gummy, chewy and, in my mind, inedible.  Not all was lost, of course, because a flourless chocolate espresso tart filling can always be scooped out by the spoonful and made to stand on its own.  No one actually complained. 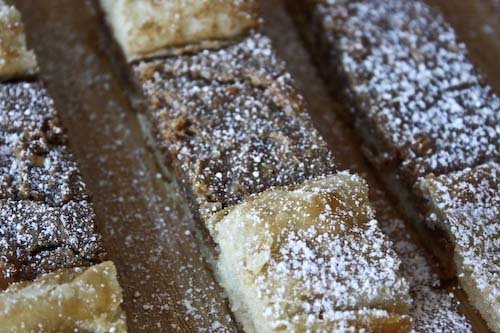 But I love the idea too much to allow that tart to remain my only attempt.  And in an act of brazen self-confidence, I decided to try kringles made out of (gasp!) a croissant dough.  What's more, I decided to do it in preparation for company, for the arrival of an old college friend and her small entourage (as much of an entourage as my little apartment can accommodate).  The weather has taken a sudden dive toward winter, and everyone here seems to be in need of a little cushioning as we begin to acclimate.  What better way to soften our descent than that classic Scandinavian pastry.  However, while kringles are usually shaped like a pretzel and made from a dough more bread-like than croissant-like, this version, from Leslie Mackie and her book The Macrina Bakery & Cafe Cookbook produces something more like a danish.
If you're in Seattle, perhaps you've had the pleasure of an actual visit to Macrina.  I never have, but I've never been to the Pacific North West, either, so I've been deprived on many fronts.  Mackie says that the inspiration for this dough came from a 1983 article in Cuisine magazine by the famed Nick Malgieri.  This is her tweaked version, and it's a good one to master.  Other than kringles, it also serves as the basis for Hazelnut Orange Pinwheels, Morning Rolls and Cinnamon Rolls with Coconut, Raisins and Walnuts. 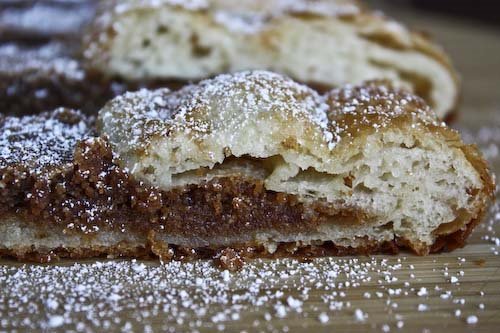 Start this recipe the night before you want to serve it, as the dough must rest in the refrigerator for at least 8 hours.  Croissant dough requires an even balance between speed and care (if only that combination came more naturally!).  But after quick rolling, there is always down-time while the dough is being re-chilled to allow for some rest and the necessary collection of thoughts.  And that is the rhythm of it.
Croissant Dough
1 1/2 cups whole milk
1 tablespoon plus 1 1/2 teaspoons dried yeast
3 tablespoons sugar
2 tablespoons vanilla extract
1 1/2 teaspoons kosher salt
3 cups plus 3 tablespoons all-purpose flour
3 sticks unsalted butter, chilled
Heat the milk until it's just warm to the touch, then transfer it to a large bowl and add the yeast, sugar and vanilla.  Whisk until the ingredients are incorporated and allow to sit for 5 minutes or so, so that the yeast can bloom.
In a medium bowl, stir the salt and 3 cups of the flour together.  Add this mixture to the bowl of milk and stir gently until everything is combined, taking care not to over mix.  Cover the bowl with plastic wrap and allow to rest in the refrigerator overnight, at which time the dough will just about double in size.
Take the bowl out of the refrigerator the next day and set it aside on the counter.
In a standing mixer, cream the butter and 3 tablespoons of flour together (it will help to cut the butter into 12 pieces first).  Mix on low speed with the paddle attachment until smooth.  Place the butter onto a floured surface and form into a 6" square block.  Lightly flour the top of the blog then set it aside on a piece of plastic wrap.  At this point, both the butter and the dough should be the same, cool temperature.
Remove the spongy dough from the bowl and put it onto a lightly floured surface.  Form it into a square, then stretch the corners out 4 inches, leaving a 7 inch square in the middle.  Place the butter block in the middle of the square and fold the corners over the butter so that it's completely covered.  Pinch the dough together so that the butter is sealed inside.  Lightly flour the dough, and roll it out into a 12x20" rectangle, pinch the dough together if it cracks open.
Next, you'll need to fold the dough into layers.  The long side should be facing you.  Fold the left side to the middle of the dough, then fold the right side so that they meet in the middle.  Then fold the dough in half from the top edge down to the bottom.  Wrap the dough in plastic wrap and refrigerate for 30 minutes.  Once cooled, let the dough sit on the counter for 15 minutes so that it can be re-rolled.  Roll it back out and repeat the process two more times, rolling, folding and chilling.
After the final chill, you'll be ready to make your kringle.
Kringle Filling
1 cup whole almonds, toasted in a 350 degree oven for 20 minutes and cooled
1 stick unsalted butter at room temperature
1/2 cup granulated sugar
1 egg
3 tablespoons vanilla extract
1 1/2 tablespoons all-purpose flour
Egg wash (1 egg whisked with 1 teaspoon water)
Coarse raw sugar
Powdered sugar for garnish (optional)
Oven preheated to 385
Blend the almonds in a food processor for until medium fine, then add the butter, sugar, egg, vanilla and flour and continue blending for about 3 minutes.
Cut the croissant dough in half and set half aside.  Roll out the other half into a 12x20" rectangle, then transfer it to a parchment paper-lined baking sheet.
Spread half of the almond mixture down the middle of the rolled-out dough, about 4x16 inches.  Fold the long sides of the dough down over the filling, leaving about 1" of the filling exposed.  Fold about 1" of the ends under to create the crust.  Repeat with second half of dough and almond butter.
Brush the dough with the egg wash (not the filling) and sprinkle the raw sugar over the dough.  Let the pastries come to room temp for about 30 minutes, until they're puffed up and soft.  Bake for about 30 minutes, rotating half way through, until dough is golden.  Let cool for about 10 minutes on the baking sheets before cutting.  Dust with powdered sugar before serving.
Makes 2 pastry sheets.
*     *     *
I almost forgot, but I'm sending this one to Susan at Wild Yeast for the weekly YeastSpotting!
Email Post
Labels: Leslie Mackie Macrina Bakery and Cafe Cookbook

Unknown said…
oh i heard about kringle. i thought it is more or less like fruit bread? that's what is written in that book. mmm... i am a bit confused. however, if it's like a croissant it must be developed into another texture and performance i suppose? i would love this for my afternoon tea, please :)
November 24, 2008 at 4:13 AM

Unknown said…
oooh - I like this and I'm gonna do it. I've always avoided the kringle as it looks too heavy, but this is more like it. I have my own recipe for croissant, but I'll use your filling and other advice. Thanks.
November 24, 2008 at 2:54 PM

Esi said…
Wow, I am so impressed you make your own puff pastry (or attempt too). This croissant dough recipe sounds great too. I will put it on my to try list. I have tagged you for an award on my site :)
November 24, 2008 at 8:43 PM

Dana Treat said…
Wow Andrea. You are brave and ambitious and it certainly paid off. Great work!

I am excited to read that you have that cookbook - how did you know about it? Macrina is a place that, whenever I walk into it, I immediately want to go home and start baking. Or cooking. The original location has a great cafe that only has a couple of hot plates and somehow turns out incredible food. Make the butternut squash galette next - it's amazing.
November 24, 2008 at 10:47 PM

Anonymous said…
I haven't been brave enough to try croissant dough yet, so I salute you! Plus, that kringle looks fantastic. Were your guests impressed?
November 25, 2008 at 3:01 AM

Andrea said…
Hi Arfi, this isn't a traditional kringle, it's a variation. My Norwegian fiance claims that it's normally more of a bread-like thing, but there are also regional variations depending on which Scandinavian country you're talking about. So the croissant dough is not the norm. But it was good!

Susan, thank you so much, and for all of the support as I get more comfortable with yeast!

Thanks Yoli, wish I could send you some, but it was gone in a day!

Annie, that's why I waited for company to load it off on. That worked out pretty well, I must say!

Shelton, glad you're inspired! I'd love to know how it turns out for you!

Esi, thanks! This dough recipe worked very well, much better than my last attempt.

Dana, I honestly can't remember how I heard about Macrina but for some reason it was on my radar, and I'm glad it was! I love the book and will definitely visit the bakery if I ever find myself in that part of the country!

Hanne, they did like it. It was polished off in about a day, which is the great thing about guests!

MyKitchenInHalfCups said…
Lovely filling! Croissants are just challenging I think. Perhaps when I've done them 200 times it will seem easy. I've done them 3 times ;)
I'd really love one of these any time of the day or night.
November 28, 2008 at 1:34 PM

Anonymous said…
Your Kringle looks scrumptious! Macrina is definitely worth a visit, if you ever make it up to Seattle. Of course, there's lots of places worth a visit up there... ;)
December 1, 2008 at 7:29 PM

Lael Meidal said…
I'm so glad I stumbled upon your blog! It's been lovely to scroll through your recipes and find many similar tastes. For example, this kringle! Bravo on a beautiful croissant dough. Thanks so much for sharing from your kitchen.
November 5, 2009 at 6:50 AM