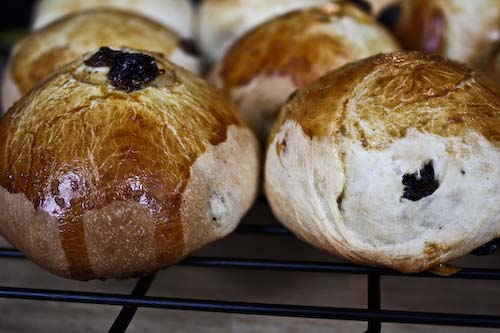 A couple of days ago, I spent the morning at the MoMA seeing their Miró show (if you're in NYC, go.  It's was an amazing show and the sculptures are not to be missed).  It was a cold, rainy, all around crappy day, perfect for museum-going.  Also perfect, it turns out, for Norwegian bun-making.  Because when I got home, R had a wrack of these little beauties just coming out of the oven.  He's had buns on the mind for a while now (that sounds a bit strange...), convinced nothing we have in America quite approximates what he's used to at home.  I'm calling these Norwegian Cardamom-Raisin Buns because that's a fairly good descriptor, although R insists they're "just buns."  Okay. 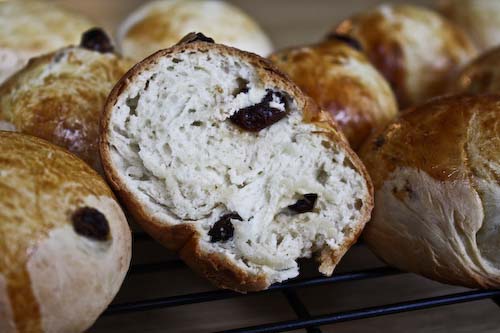 I see cardamom called for in a handful of recipes these days, and it seems to be a fairly trendy spice in baking.  But it's surprisingly scarce in New York.  So when I stumbled on an exorbitantly priced bottle, I bought it anyway.  Evidently it's as common as ginger in Scandinavia, and comes from the same family.  You can also easily find it in Indian stores (right Hanne!), assuming you can easily find an Indian store.
If you happen to speak Norwegian, the original recipe comes from this website.  If not, I forced R to translate and you'll find his version below.  This is a rather forgiving recipe, as R didn't bloom his yeast or weigh any of the ingredients, just eyeballing instead.  In any case, they're prefect for a cold, rainy day after a morning at the museum. 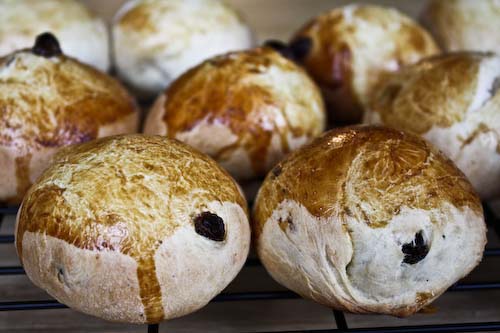 "Just Buns"
1 liter all-purpose flour
1 package active dry yeast
3 1/2 deciliters milk (not fat free, but actually that works fine)
Raisins, as much as you'd like (some alternatives would be chocolate, marzipan or other dried fruits)
100 grams butter, melted
1.25 deciliters sugar
1 teaspoon cardamom
1 egg, beaten, for the wash
Mix flour, yeast, sugar and cardamom.  Add the milk to the melted butter, and heat to 40 degrees Celsius for dry yeast (which is just a bit warmer than body temperature).  Add the milk and butter mixture to the flour mixture and mix until a smooth dough forms.  At this point, kneed the raisins into the formed dough, just until incorporated.
Sprinkle a bit of flour on top, cover the bowl and allow the yeast to rise for 30 minutes or double the original size.
Kneed the dough a bit, then split it into 16 pieces.  Form each piece into a bun by rubbing it between the palms of your hands or against the table with one hand.  The pressure should start out hard and get progressively lighter.  There should not be cracks in the dough, but if there are, face those down toward the pan so they'll be pretty.  Brush the tops with the beaten egg.
Oven should be preheated to 400 Fahrenheit (200 Celsius).  Bake on sheets for 10-15 minutes.
*     *     *
I'm sending this over to Susan at Wild Yeast for next week's YeastSpotting!
Email Post

veggie belly said…
This is a very interesting flavor combination. We use cardamom and raisins in Indian desserts like milk puddings.
December 2, 2008 at 10:46 PM

Esi said…
Yum! I can just imagine how these would be with chocolate. I am noticing that cardamom is showing up everywhere these days. I haven't used it yet though.
December 2, 2008 at 11:10 PM

Andrea said…
Veggie Belly, that's true, I've seen cardamom and raisins in Indian desserts. That's going to be my next frontier, I think, since we're both crazy about Indian food!

Esi, chocolate was Ragnar's other thought as well, but we didn't have any. He'll have to make a repeat performance.

redmenace said…
Hooray for Cardamom! I love it! My friends own a restaurant and they make cardamom ice cream. It's amazing! Thanks!
December 3, 2008 at 3:40 AM

Anonymous said…
Lovely buns! (That also sounds a bit strange) I decided to splurge on cardamom this past summer and have been using it in nearly every sweet baked good since.
December 3, 2008 at 3:40 AM

Anonymous said…
I love cardamom. The good thing is, although it is expensive the flavor is pretty intense so a little goes a long way. Great buns!
December 3, 2008 at 5:29 AM

Dana Treat said…
I am so jealous that you get to see amazing art whenever you want. My husband is in NYC this week and I sooo want to be there! I love the buns! Have you shopped Penzey's Spices online? It's a great way to save money and get almost any spice imaginable.
December 3, 2008 at 5:52 AM

Snooky doodle said…
These look great . I m crazy about bread recipes they re yummy but not so crazy about making them . Let s say I m hopeless at bread making :(
December 3, 2008 at 8:26 PM

Susan from Food Blogga said…
You're so right. Cardamom is expensive. But after one taste, you realize pretty quickly, that it's worth every penny. And those buns look scrumptious!
December 4, 2008 at 2:35 AM

Sunshinemom said…
This is the first time I have seen quantities in decilitres on any blog - Just an observation:) Nice soft buns, and must have had a great aroma too:)
December 5, 2008 at 12:16 PM

Andrea said…
Redmenace, cardamom ice cream? That sounds like a must try!

Toxo, I prefer "rolls" to "buns" but the Norwegian insists ;-)

To both Susans: You're so right, although expensive, cardamom is worth the investment and a little goes a long way!

Dana, your husband is in NYC? You should have come to and then you could have seen some of our great art! I am a lucky girl, for sure ;-)

Y, I love the idea of "just buns" also, especially when they're made for me!

Sorina, thank you so much! I hope you'll come back again!

Joie de Vivre, I am lucky, I know. Great art and great buns!

Snooky, I have trouble believing you're not great at anything in the baking world!

Sam, they were just coming out of the oven when I got home, so yes!

Sunshinemom, it's the first time I've ever written anything in deciliters as well, but that's how the recipe was translated!
December 5, 2008 at 10:27 PM

Annie said…
It's a pity that cardamom is hard for you to find... where I am in Sydney there are many Indian spice shops and gourmet food shops around. And my favourite brekkie cafe serves cardamom coffee - just like my Dad makes!
December 6, 2008 at 11:30 PM

Jennifer Brewer said…
I was thinking of making these buns. They look great. I have cardamom seeds but not the liquid form. Do you think steeping the seeds in boiling water would get an adequate strength liquid?
December 18, 2008 at 4:25 AM

Andrea said…
Jennifer, we used the powder form of cardamom, so I'd try grinding up your seeds. You can use a mortar and pestle or maybe even try a food processor. Let me know how it goes!
December 18, 2008 at 4:29 AM

Jennifer Brewer said…
Actually I just realized I have the powder form too, so I could just use that. Thanks!
December 18, 2008 at 4:37 PM

Blue Haired Witch said…
This sounds like a great recipe, can't wait to try it. I just have 2 quick questions: I notice there is no salt whatsoever in the recipe, is that correct? Also, at what point do the raisins (currants in my case) be added?
March 28, 2009 at 4:37 PM

Andrea said…
Hi Tatiana, Sorry about not specifying where to add in the raisins. I've corrected the recipe. Also, I double checked the original and there is indeed no salt. But a little might enhance the flavor, if you'd like to add it. It's a subtly sweet dough without. If you make them, let me know how it goes!
March 28, 2009 at 6:37 PM

Ruiz said…
I am here to tell you about a natural remedy that is
guaranteed to make you wonder why your doctor didn't tell
you about it. Then, on the other hand, it is pretty obvious
why your doctor didn't, because that's not his job, is
it? But, seriously, promise me you won't get too angry
with your health practitioner, it's really not their
fault. They can only practice what they're told to
practice, right?
When your health is at risk there's no time for Tom
foolery, you've got to get down to the cause and nip it
in the bud. So you've been suffering from painful gout
attacks have you? Well, allow me to give you a new
perspective on the solution to what plagues you I was once in your shoe until my college friend introduce me to Dr Itua herbal center which cure my hiv/herpes after drinking it for two weeks as instructed, Dr Itua is an africa herbal doctor who has natural power to cure the following diseases: Herpes,Hiv,Hepatitis B,Fibroid,
Schizophrenia,Cancer,Scoliosis,Fibromyalgia,Fluoroquinolone Toxicity Syndrome Fibrodysplasia Ossificans Progressiva.Fatal Familial Insomnia Factor V Leiden Mutation ,Epilepsy Dupuytren's disease,Desmoplastic,Diabetes ,Coeliac disease,Creutzfeldt–Jakob disease,Cerebral Amyloid Angiopathy, Ataxia,Arthritis,Amyotrophic Lateral Sclerosis,Alzheimer's disease,Adrenocortical carcinoma.Asthma,Allergic.
As Dr Itua assure me that all those disease below that he guaranty 100% permanent cure to all these disease I believe Dr Itua so much because he help me cure my hiv/ herpes which has being my burden in life so I promised Dr Itua that I will testify about his work online after curing me and that is what I'm doing here so please if you are suffering from those diseases do not hesitate to write Dr Itua Herbal Center On Email: drituaherbalcenter@gmail.com Or chat with him on whatsapp:+2348149277967
September 15, 2021 at 6:43 PM