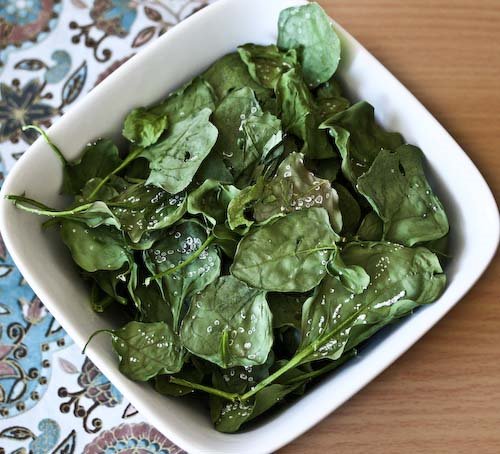 This isn't really a recipe, it's more of a suggestion/experiment.  One which I thought went quite well, actually.  A light, healthy snack for when you're craving salt, but not oil.  They're cheerful, bright green, and paper thin.  The crispiest melt on your tongue like tissue paper in the rain.  Some remained a little more on the moist side (god, I hate that word.  I don't know why.  But I have to use it because that's what they were), but were still salty and tasty.  Please don't expect potato chips, though.  It's still spinach, after all.
And it's not a bad way to put down a bag of baby spinach, either (if you're lazy and buy the bag, and why not?  It's not a real recipe, so you don't need to hold yourself to any standards of hard work).  I stuck with salt for most of them, but one batch got the royal treatment with a little dried basil.  Turns out, spinach loves basil.  And I do too. 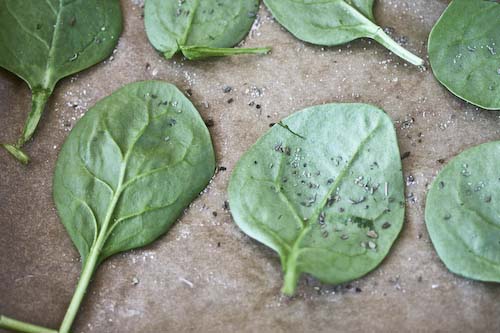 Baked Spinach Chips
One bag of baby spinach
Salt
Herbs of your choosing (I tried basel, but experiment and see what you like!)
Pepper, if you like
Cover a baking sheet with parchment paper and lay the spinach in a single layer on top.  Sprinkle with salt, pepper, herbs...
Bake in an oven preheated to 350 for around 7 minutes.  Maybe a bit more, maybe a bit less.  They should turn crispy and wafer thin.  Carefully peel off the paper and enjoy.
UPDATE:  Some readers have had trouble with the spinach sticking.  It's important that you use parchment paper on your baking sheets, as stated in the recipe, to avoid this.  Wax paper and tin foil won't work, and obviously a bare baking sheet won't do it, either.  You can find parchment paper in most good grocery stores or baking shops.
Email Post
Labels: Original recipe

Cathy - wheresmydamnanswer said…
This is a great idea - I had these years ago at a restaurant and fell in love - Now I can make these babies at home!!
February 17, 2009 at 5:26 PM

Andrea said…
Veggie Belly, I don't think this would turn out in the microwave because you really need the dry heat of the oven (think how soggy microwaving can make some things). But you can do several batches at once in the oven, so it's not too bad.

Gastroanthropologis, I bet you could come up with some other good variation, like vinegar, or lemon...

Cathy, did you really? That's awesome!

Andrea said…
Hi Mar, yes I mean Fahrenheit. I'll be more explicit about that in the future. You'd think I'd know better with a European fiance!
March 5, 2009 at 12:42 AM

Anonymous said…
I made these tonight along with Kale Chips and both were delicious! I used a red pepper based seasoned salt so they turned out spicy, chunchy and salty, all my favorite things! Can't wait to try this with other fresh greens.
February 8, 2010 at 3:34 AM

Buy Indian Books said…
Wow! looks yummy! I am working on my diet and this recipe will really help. I want to eat more vegetables and fish and less of meat. I was wondering if you can add toasted bread in cubes with this recipe too? to put on a crunchy effect on the food.. thanks.
July 26, 2010 at 8:21 PM

Anonymous said…
I would like to make a bunch at once. Would this work if you put a bunch of spinach... not one single layer on the pan? Thanks for anyone's answers.
August 7, 2010 at 6:47 PM

Anonymous said…
I just tried this tonight! And I could not believe how great it tasted! I normally do not like spinach but these chips are amazing! Im on the HCG diet and was trying to find more ways to get my veggies in. The only issue I had is that my herbs werent actually baked into the spinach. The herbs all feel off but the taste was still there! Thanks for posting this!
September 18, 2010 at 7:16 AM

Anonymous said…
Thanks for the idea! I sprayed apple cider vinegar on along with the salt and pepper before baking - delicious!
February 1, 2011 at 6:26 PM

Unknown said…
I saw something similar on Dr. Oz but there wasn't a recipe and I was delighted to find this. Normally, I absolutely detest dark leafy green things but I have heart disease and that simply had to change. Voila! Spinach chips! A squirt of olive oil, grind or sea salt and lemon pepper and I'm happily chewing my dark leafy green things.

(I have a dehydrator, but I prefer the oven method.)

I also have done this with kale. Broccoli doesn't work unless you make sure ALL the stem is cut off first, or it's like chewing rocks.

Anonymous said…
I use a dehydrator and when they are dry, with a Misto oil sprayer, I spray lightly with olive oil, and then sprinkle lemon pepper or dried tarragon or jerk spices, or even dry Ranch seasoning. This works great with other veggies too.
August 5, 2011 at 5:12 PM

Jay said…
Good stuff. Thank you so so much for sharing your knowledge with the world through the Internet. Wonderful blog and post you got here
HCG Diet
HCG Diet Drops
August 12, 2011 at 8:15 PM

Anonymous said…
I have seen recipes similar to this but they put on cooling racks to get the air all around.
I will have to try both ways.
Thank you!
May 15, 2013 at 6:28 PM