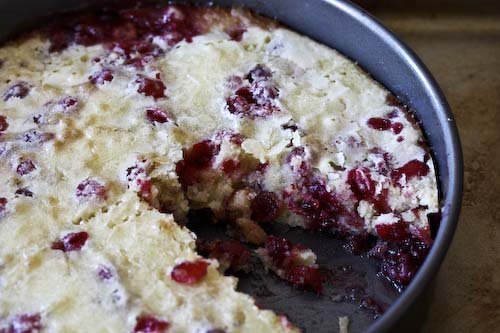 There's something I don't understand.  I don't understand why we don't take more notice of the cranberry.  Why it appears in November for Thanksgiving, then inexplicably drops off the face of the earth for the rest of the year, especially since cranberries are harvested in September and October.  In hindsight, I should have put out a notice back at the beginning of the holiday season to grab a few bags and freeze them, since they freeze so exceptionally well.  Then, when it's dark and gray and there isn't a bit of mood-lifting tartness to be had, you can pull them out by the handful and defrost only the ones you intend to use. 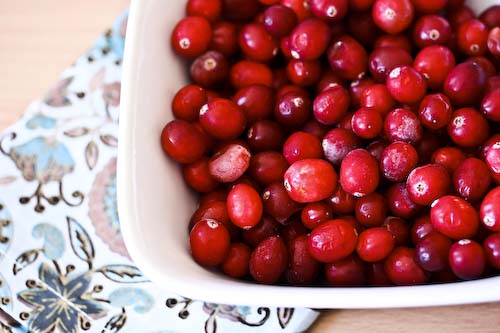 I've been hawking this recipe all over town.  Because it's easy.  Because it's beautiful.  Because it redeems the cranberry from mere relish status, moves it over to the center of the plate for once.  No longer the maligned little sister to the attention stealing turkey.  If, however, you're kicking yourself for passing up bags of these ruby jewels a few months ago, this cake has been made with blueberries to great acclaim.  Of course, that leaves the problem of finding blueberries. 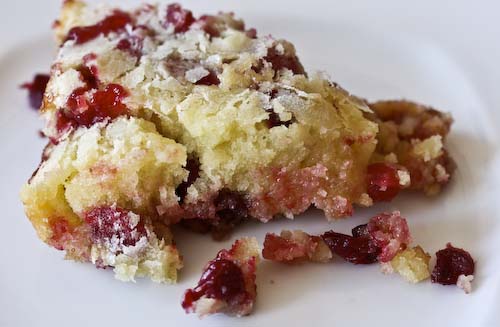 This is a rustic dessert, so don't expect perfect slices.  Just embrace the mound of cranberries and cake that falls onto your plate.  When it's cool, a thin layer of craquelure forms on the top, ready to shatter then dissolve.
The recipe comes from Laurie Colwin's More Home Cooking where it's called Nantucket Cranberry Pie.  Evidently in Nantucket, they're a bit confused about distinctions between pies and cakes.  Or maybe distinctions just don't matter when the outcome is this good.  After all, we're all about breaking down barriers with this one. 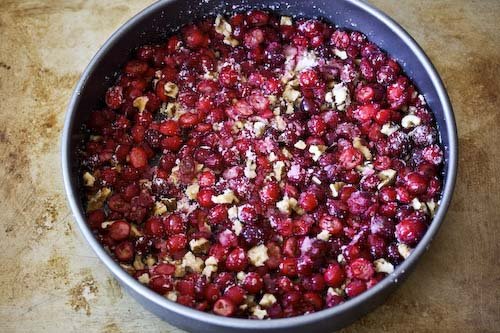 Nantucket Cranberry Pie
From Laurie Colwin's More Home Cooking
2 cups chopped fresh cranberries
1/2 cup chopped walnuts
1 1/2 cups sugar, divided
2 eggs
3/4 cup butter, melted
1 cup flour
1 teaspoon almond extract
Spread the cranberries, walnuts and 1/2 cup sugar in the bottom of a 9" or 10" cake pan (or skillet or anything else you might have lying around).  Mix the rest of the ingredients in a separate bowl to form a batter.  Pour the batter over the cranberry mixture and bake in an oven preheated to 350 for around 40 minutes.  Cool a bit in the pan, and enjoy.
Notes:
* Pecans would also be good instead of walnuts
* This is a rustic dessert, so don't expect perfect slices.  Just embrace the mound of cranberries and cake that falls onto your plate.
Email Post
Labels: Laurie Colwin More Home Cooking

SugarPunk said…
This looks fabulous! Do you know if it would turn out using frozen cranberries? Being that fresh is hard to come by at the moment...
February 17, 2009 at 6:12 PM

Hayley said…
Cranberries are perhaps my favorite ingredient. I add them to anything that will do those jewels justice. This pie sounds fantastic, and I too am one of those shoppers who stocks up on cranberries to freeze for warmer (or colder) months. Thanks for sharing!
February 17, 2009 at 8:55 PM

Lib said…
Wow, just stumbled across this blog when looking for a Spicy Lentil Noodle recipe on the internet that I managed to lose, but I'm happy, this blog is so much better! I feel like going home and cooking right now. I will definitely be visiting this site again.

Just a shame I can't make the cranberry recipe- I live in Australia so we don't get them down here. Used to live in Massachusetts right next to a cranberry bog though- that was great.

Creative Classroom Core said…
What tasty looking photos! I bet the cranberries were delicious!! Love your site!
February 18, 2009 at 4:01 AM

Pattie @ Olla-Podrida said…
I adore Laurie Colwin's books and miss her terribly. Thanks for posting this recipe. Fortunately I DO have three bags of frozen cranberries in my freezer.
February 18, 2009 at 6:10 AM

Anonymous said…
I loe cranberries! I have already frozen 3 big bags... to last me for quite sometime. That pie is a goodlooking one with so many red specks.
February 18, 2009 at 8:05 PM

Andrea said…
SugarPunk, you could definitely use frozen. Mine were just cranberries I had frozen in November. You don't even need to defrost, just give them a rough chop and drop them in (I've even heard that frozen cranberries are juicier for some reason). Let me know how it goes!

Lib, you could try this with blueberries, or any tart berry you can get your hands on. I would imagine using red currents could also work. And thanks for your lovely comment!
February 19, 2009 at 5:42 AM

Sam said…
I've still got a bag of cranberries in my freezer from Christmas, this looks like the perfect way to use them!
February 22, 2009 at 8:14 PM

Anonymous said…
Andrea, this looks great and I would have no problem with a heap of cranberries and juices and cake/pie mounded on my plate...I, too, have some cranberries frozen in my freezer. And hey, that's a good question, why the heck do the drop off the face of the earth after December? Such a shame. Good work bringing them back into the spotlight!
February 23, 2009 at 4:14 AM

Anonymous said…
I made this but annoyingly and immediately before I had to make it, there were no cranberries at any of the local grocery stores.

Anonymous said…
masnoosesleuths -- I had the same problem. I used blueberries, which are sweeter (and no I didn't lessen the sugar) and it was still so tasty! My friends were very impressed :)
February 24, 2009 at 4:25 PM

Halley said…
This is a great recipe! Since I couldn't find cranberries at the moment I used blackberries instead and I replaced the walnut with pecans. It turned out amazing and very yummy. Thanks for the recipe.
March 18, 2009 at 5:20 AM

tommysmommy said…
This recipe was given to me over 30 years ago by a friend. It never fails to get raves from everyone who tastes it. Make sure you use PURE almond extract, not artificial. My family's favorite variation is rhubarb (slice stalks into about 1/4" pieces, or slice in a food processor). Even people who "don't like" rhubarb are won over by this. I also sprinkle about 1 Tbl of fresh lemon juice over the fruit and 2Tbl of sugar on top of the batter.
May 31, 2009 at 7:15 PM

nowayride said…
Great recipe, but mine came out slightly lacking. I reduced the sugar content in the batter slightly (~1/4 cup) as per comments and it came out sweet enough, but why not a pinch of salt in the batter? The flour-sugar-butter-egg follows similar to sugar cookies (and actually tastes like a very buttery sugar cookie), except that it has no salt.

Also, the top of mine came out browned after 30 mins, but the center is fine.

The cranberry makes it taste so delicious though. I just 1.5 the recipe and made it in 2 disposable pie tins, the portions were correct.
November 26, 2009 at 3:39 AM

Dumbwit Tellher said…
This recipe looks incredible. I swear I can smell it's sweet aroma here in Texas. I definitely am going to try this out. Thank you so much. Your blog is great!
December 5, 2009 at 12:10 AM

Unknown said…
Here is a slightly different version, which is the one I grew up with going to Brewster, Cape Cod in the 1970s

Anonymous said…
I've made this recipe many times since I first read it in a magazine review of Colwin's book. My family calls it "Cranberry Flat Cake," for obvious reasons. (And, yes, it works perfectly well with frozen berries.)

For an even prettier version, make it in a spring-form cake pan, pop it out when it's cool, and invert it onto a serving plate, so all the jewel-like berries are on top. Some will roll off onto the plate, but who cares?
February 8, 2010 at 10:13 PM

Garret said…
Finally a great recipe to use our Cranberries and not only on thanksgiving!

The pie looks amazing but I imagine it tasted even better!
Secret Restaurant Recipes
July 22, 2010 at 3:56 AM

Anonymous said…
I couldn't wait until I had cranberries to make this. I made it with blueberries and almonds. Simple, and delicious. Try it with a dollop of Greek yogurt.

I also substituted 1/3 of the butter with almond oil.

Unknown said…
I changed up the recipe to include whole wheat flour and less sugar, and added some mini choc chips! It turned out great and stunning presentation.

Jeyn Levison said…
I make a very similar cake, but wheat-free, with a combination of oat flour and almond flour. And to make it even a little more special, I use half olive oil and half butter. It's divine.
November 25, 2010 at 2:15 AM

Anonymous said…
The article in Gourmet that accompanied the recipie was so sweet, I remember it as encouragement to get my young daughter to help. Now she is a somtimes professional chef. Thanks Laurie, RIP.
PS it's delicious, beyond the memories.
December 2, 2012 at 6:25 PM

San Pedro Storage said…
This does look fantastic, kind of rustic and wholesome. I think you are right, it might be a cake. Actually I don’t think it is a cake or a pie. I think it is a cobbler. A conversation piece and a dessert all in one!
June 7, 2013 at 2:37 PM

Anonymous said…
How much is a cup in this recipe? In another one I found different equivalents for solid (g) vs. fluid (ml) substances, how much should I take in this one? Cup is a funny thing for Europeans ;-) but I love this recipe and want to try it.
November 18, 2013 at 11:44 AM

Anonymous said…
I made this recipe for Thanksgiving and it got rave reviews! I did add 1/2 tsp. of salt, the zest of a whole orange, and 2T orange liqueur, and no almond extract. It was divine
November 29, 2013 at 3:48 AM

Susan in Texas said…
Just made this recipe again for a book group holiday potluck. Huge hit as always. This time I wanted to say thanks for the recipe!
December 11, 2018 at 4:49 PM

La Donna Mobile said…
I've made this for years from a recipe I got from a cafe in Maine which used one egg mixed in a half cup of milk and creamed the butter and sugar (plus baking powder)
I tried this version--it is WAY TOO MUCH melted butter. If I had put it all in, it would have had a lake of butter on top of the batter, so I decided to only use half of it, and it turned out just fine.
All versions are delicious, but you want more of a cake than berry pudding (clafouti) texture, I suggest you go the creamed butter route.
January 4, 2019 at 10:03 PM