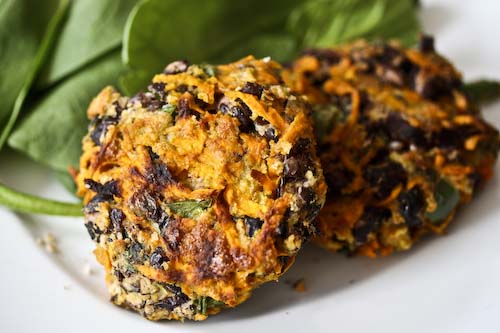 I've started this post over several times now.  It's just not coming, but I so want to tell you about these.
I started by thinking that instead of economic depression, I wish these would sweep the world.  Then I wanted to tell you about how they're an all-in-one package.  Inexpensive ingredients, kitchen basics mostly, healthy, tasty, satisfying.  And if you ever find yourself in an adorable Chicago apartment with an only minimally equipped kitchen (as I did last weekend while visiting my sister), you can still pull them off.  Yes, you might have to buy a $4 box grater at the grocery store while you're there getting your sweet potato, but it will be worth it.  A sweet potato, a box grater and a little pan for the garlic and green onions.  The only other thing really is a can of black beans, plus, you know, some spices.  One spice, actually.  Cumin.  So you see how approachable they are? Hardly anything to buy and they're ready quick, too. 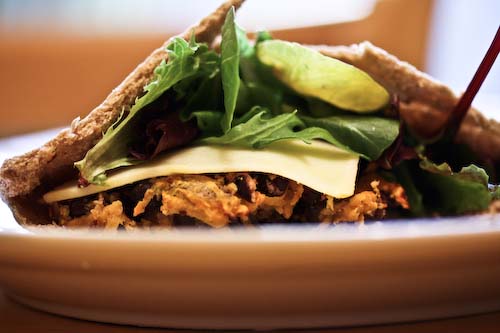 I found the recipe on Esi's wonderful blog Dishing up Delights.  She got it from Martha Stewart, but I so prefer to imagine it coming from her kitchen.  Every time I see Martha on television I'm struck by how much interrupting of her guests she does, how overbearing she is.  Esi's blog is not overbearing.  I imagine that cooking with her in California would a relaxed experience.  And this is a relaxed little dish. 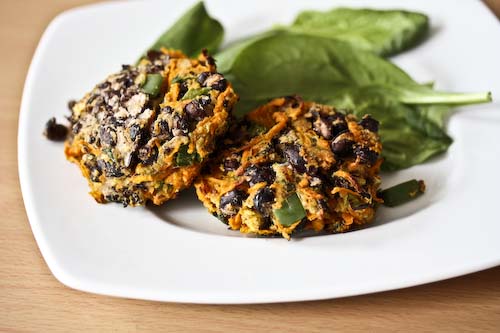 While Esi made 4 cakes, I decided to divide the mixture into 8 smaller disks that were intended for pitas.  I'll post the recipe as I made it here, but Esi garnished her patties with a lime and jalapeno spiked sour cream, which sounds delicious.  I decided not to push my luck in the little Chicago kitchen, and popped a can of salsa instead.  So if you want the sour cream, you'll have to go visit Esi to get it.
Sweet Potato and Black Bean Cakes
Oil for the pan
3 scallions, sliced (half a bunch)
4 garlic cloves passed through a press
1 jalapeno pepper, chopped, with seeds and ribs removed
1 1/2 teaspoons ground cumin
1 15 oz. can black beans, drained and rinsed
Salt and pepper
1/2 sweet potato, grated
1 egg, lightly beaten
1/4 cup breadcrumbs
Warm the oil in a saute pan over medium heat.  Add the scallions and cook for about a minute until they're soft.  This will only take about a minute.  Add the scallions, garlic and cumin and stir until fragrant, about 30 seconds.  Place this mixture into a large bowl.
Add the beans and mash the mixture with the back of a fork, mashing about 75% of the beans, but leaving some of them whole for texture.  Season with salt and pepper.  Add in the rest of the ingredients.  Divide into 8 balls and flatten them between the palms of your hands into patties.
Lay the patties on a greased cookie sheet and broil on one side for about 8 minutes.  Carefully flip, then broil on the other side for about 3 minutes more.  If you're my sister and using that rip-roaring hot broiler of yours, the total time will be 3 minutes, and you won't be able to flip.  They'll still be good.
Email Post

Dana Treat said…
Yum, some of my favorite flavor combinations here. I agree with you about Martha. I love her books but cannot watch her!
February 27, 2009 at 7:26 AM

Snooky doodle said…
whata nice recipe! do you think i can use normal potatoes for the sweet ones since I don't find them here. wish to try these :)
February 27, 2009 at 8:20 AM

Hayley said…
Ever since you mentioned these to me, I've been craving one. Thanks for the visual, now I have to go get the ingredients!
February 27, 2009 at 3:58 PM

Esi said…
I'm blushing :) So happy you enjoyed these as much as I did. I agree with you about Martha interrupting people, I think Oprah does it too which is why I don't watch. haha
February 27, 2009 at 11:28 PM

Cathy - wheresmydamnanswer said…
DAMN do these look incredible - I have been on such a sweet potato kick lately and this will fit in perfect with all the other yummy creations!!
February 28, 2009 at 1:32 AM

RevJen said…
These look great. When you say "1/2 sweet potato", though, about how much do you mean? Sweet potatoes have a huge size range. About a cup of grated sweet potato? More? Less?

Anonymous said…
These look wonderful. How well do they hold together, are they easy to work with/cook?
February 28, 2009 at 8:13 PM

Virginia, no dumb questions here! You do want your half sweet potato to be peeled, then just grate it still raw. It will have enough time to cook under the broiler since grating gets it into such thin little slices.

Nick, they hold together better the more smash beans you have. They're not as sturdy as a meatball, say, but they worked perfectly in a pita. You have to be a bit careful when turning them, and maybe decide not to care too much about a little cracking and crumbling. They're still great!
March 1, 2009 at 12:07 AM

Andrea said…
Canayjun, you can really do it with either. I've done it with both according to what I could find. The first time I did it with a proper sweet potato and the second time with a yam.
March 1, 2009 at 12:08 AM

Maris said…
I love sweet potatoes! One of my friends has a recipe for black bean and sweet potato chili that I haven't tried yet but definitely hope to soon!
March 1, 2009 at 8:31 PM

Anonymous said…
I love sweet potatoes and this is a wonderful new take on it. I like the bit of spice too.
I have a love/hate relationship with Martha. I love her recipes but when she corrects the grammar of the way her guests speak on her show I just want to stick a bitter lemon in her mouth.
March 4, 2009 at 12:21 PM

Caro said…
I just made these for dinner! SO GOOD! I ran the recipe through sparkpeople.com's calorie counter and two of these are only 165 calories!
May 1, 2009 at 2:51 AM

philipkotler11 said…
I really enjoy reading your blog as the postings are so simple to read and follow. Outstanding. Please keep it up. Thanks.
QuickBooks not working
December 23, 2015 at 9:03 AM