May's Off the Shelf guest post comes from Camille, of the always lovely Croque-Camille.  I'm sure you'll enjoy it, because it's basically amazing!
French Fruit Tart
I have four cookbooks in my house.  They're all in French, and two are about desserts.  (I suppose this is normal, considering I'm a pâtissière.)  And I don't actually cook from them all that often, so it's kind of serendipitous that when Andrea asked me to write a guest blog I had just fallen in love with a new (to me, anyway) recipe for tart crust.  It comes from Clotilde Cusoulier's Chocolate & Zucchini, and is one of those magical recipes that is both super easy and really works.  It's a little surprising that I've never come across a recipe like this one in the course of my baking career.  The "dough" is incredibly crumbly, and simply pressed into a buttered tart pan to bake.  The resulting crust is so crisp, golden and buttery, that Clotilde warns you may be tempted to eat it straight.  I agree, but when you've got pastry cream and fresh fruit standing by to fill it, the extra few minutes waiting time are well worth it.  As are the couple of minutes it takes to brush the bottom of the tart with a thin layer of melted chocolate.
This will keep that beautiful crust from getting soggy once the cream and fruit enter
the picture. 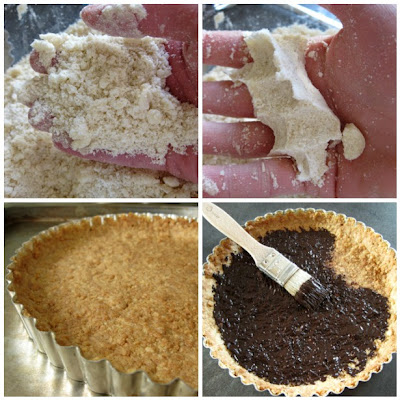 The way I see it, recipes are fluid things.  Suggestions, if you will.  Sure, there are certain ratios that need to be respected: put too much oil in your mayonnaise, or too much liquid in your ganache, and the results will be decidedly less appetizing.  But even these are fluid.  The rule is 8 ounces of oil to one egg yolk for mayonnaise, but you still need to pay attention when you're making it.  Getting too thick?  Thin it with a little water.  Not coming together? Start again with a new yolk.  So when Clotilde suggests using her crust to make a strawberry tart, I ask, "Why not throw in those kiwis I got in the CSA?" and "What if I used Pierre Hermé's recipe for pastry cream instead? 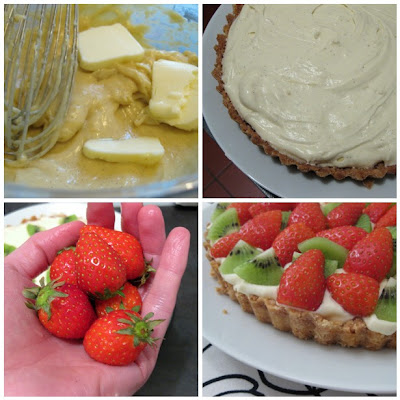 It turns out that the Hermé recipe is really thick.  Like, not even spreadable once it's cooled thick.  Good thing I have a trick or two up my sleeve to get the results I want.  I fold in about an equal volume of very lightly sweetened whipped cream, and all of a sudden, I have crème diplomate, which, in my opinion, is a superior tart (or éclair, for that matter) filling anyway.  Topped with quartered sliced kiwis and halved tiny strawberries, it was a perfect spring dessert. 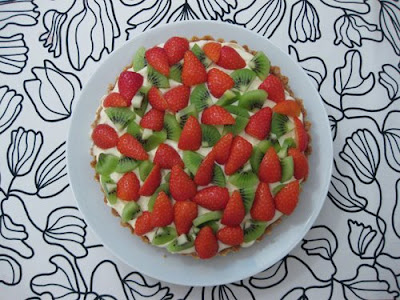 French Fruit Tart
Translated, adapted and constructed from the French versions of Clotilde Dusoulier's Chocolate and Zucchini and Pierre Hermé and Dorie Greenspan's Desserts by Pierre Hermé
For the crust (pâte sablée):
The original recipe is for one 25 cm or 10 inch tart.  I found it makes enough for two 20 cm or 8 inch tarts, which I baked on separate occasions - the unused dough will keep up to two weeks in an airtight container in the fridge. (Sorry for the weird measurements, I'm converting from metric.  But I'm keeping the weight measures because they work better than volume.  If you don't already have one, a kitchen scale is an invaluable tool.)
75 g/ 2.65 oz cold unsalted butter, cubed, plus some for the tart pan
75 g/ 2.65 oz sugar
150 g/ 5.3 oz flour (pastry flour is ideal, but all-purpose will work, too)
1/4 tsp. fine sea salt
1/2 Tbsp. cold milk
30 g/ 1 oz chocolate
1. Combine the sugar, flour and salt in a medium bowl. Add the butter and rub in with your fingertips (or a pastry cutter, or pulse in a food processor) until the mixture takes on the consistency of breadcrumbs.  Add 1 Tbsp. of the milk and gently combine.  The dough will look crumbly, but it should hold together when you squeeze it in your hand.  If not, add the rest of the milk, a little at a time, until the desired result is achieved.
2. Butter a tart pan (the kind with a removable bottom, preferably) and dump in the dough.  Spread it out evenly and press it into the sides and bottom to form a thin crust.  Cover with plastic wrap and chill at least 30 minutes.
3. Heat the oven to 180 C/ 355 F.  Bake the tart shell (sans plastic wrap) until it is nicely browned, about 15 minutes.  Remove from the oven and cool.
Melt the chocolate and brush a thin layer onto the bottom of the cooled tart shell.
For the crème diplomate:
I halved the original recipe to fill my smaller tart shell, if you're making the 10 inch one, go ahead and double the amounts I've given here.
250 g/ 9 oz. milk
1/2 vanilla bean
1 egg + 1 yolk
50 g / 1.8 oz sugar
Pinch of salt
23 g/ .8 oz cornstarch
25 g/ .9 oz unsalted butter, softened
90 ml/ 3 oz. cream, whipped to medium peaks with a teaspoon of sugar, if desired.
1. Split the vanilla bean and scrape the pulp into a saucepan.  Add the milk and heat to a simmer.  Cover and let infuse 15-30 minutes.  Fish out the vanilla bean.
2. Meanwhile, combine the sugar, salt and cornstarch with a whisk.  Stir in a little of the milk, then beat in the egg and yolk.
3.  Bring the milk back up to a simmer, then temper in the egg mixture. (Whisk a little of the hot milk into the eggs, then pour it all back into the saucepan.)  Cook over medium to low heat, whisking constantly, until the mixture thickens and boils.  Boil 2-3 minutes to remove the raw starch flavor.  Remove from heat, scrape into a bowl, and whisk in the butter.  Cover directly with plastic wrap and chill thoroughly.
4. Using a rubber spatula, stir the cooled pastry cream to loosen it a bit.  Beat in about a third of the whipped cream.  Fold in the remaining cream in two additions.
For the tart:
Tart Crust:
Crème diplomate
Fresh seasonal fruit, cut into bite-size pieces.
1. Fill the crust with a heaping layer of cream.
2. Top with fruit, the more colorful the better.
3. Serve ASAP.
Email Post
Labels: Chocolate and Zucchini Desserts by Pierre Hermé Off the Shelf

Dewi said…
Most beautiful and delicious tart Andrea. This one is my family favorite. They always looking forward for summer, as I am making this very often. Yours is gorgeous.
May 4, 2009 at 2:26 AM

Maia said…
I love these! I make them every time I'm asked for a dessert at holidays. They look so elegant, but they're actually quite fun and not hard to toss together!
May 4, 2009 at 2:45 AM

The Cooking Photographer said…
Oh it's so lovely! Fruit tarts are wonderful, and this one looks delicious.
May 4, 2009 at 5:43 AM

figtree said…
I love making mini fruit tarts, your tart inspires me to pull out my tart pans. Thanks for sharing Figtreeapps
May 5, 2009 at 3:02 AM

gastroanthropologist said…
Pierre Herme = God in my book. One of my good friends has been an intern for him for about six months in Paris. She is learning so much and I can't wait till we are back together in the same city so I can taste some of what she has learned.

GK Chesterton: “The poets have been mysteriously silent on the subject of cheese.”

Voila: www.tastingtoeternity.com. This book is a poetic view of 30 of the best loved French cheeses with an additional two odes to cheese. Recipes, wine pairing, three short stories and an educational section complete the book.

From a hectic life in New York City to the peace and glories of the French countryside lead me to be the co-founder of www.fromages.com. Ten years later with the words of Pierre Androuet hammering on my brain:

“Cheese is the soul of the soil. It is the purest and most romantic link between humans and the earth.”

I took pen and paper; many reams later with the midnight oil burning Tasting to Eternity was born and self published.

I believe cheese and wine lovers should be told about this publication.

viagra online said…
I love the recipe, made for my sister's baby shower and the guests were surprised .. all flattering me .. thanks for sharing it with us!
May 27, 2010 at 6:39 PM

lots in Costa Rica said…
I love when I have the opportunity to read blogs as interesting as this. really thanks and congratulations. Costa Rica Cheap Land for Sale
July 15, 2010 at 11:49 PM

Cris said…
This information is very interesting, I really enjoyed, I would like get more information about this, because is very beautiful, thanks for sharing! costa rica investment opportunities
July 30, 2010 at 10:09 AM

Buy generic viagra online said…
Yumm.. french fruit tart dessert... The best part is it's a no-bake cake with strawberry and kiwi on the top. With layers of melted chocolate and cream spread on it. I usually prefer this type tart as no baking is required plus its quick to make when you expect an unexpected guest at home.