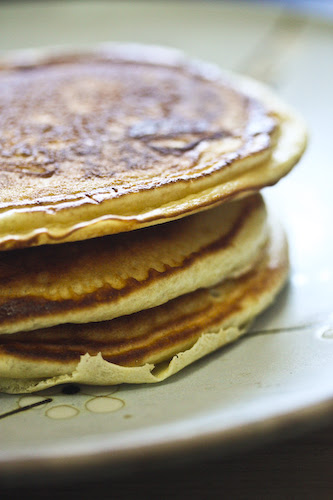 I first ate these when I visited R for the first time in Norway, the trip during which I first met his family, saw where he lived, and realized that there are places on this earth where it can actually rain for 85 days straight. That sounds worse than it was, because it didn't rain all day every day. Just part of all of the days. 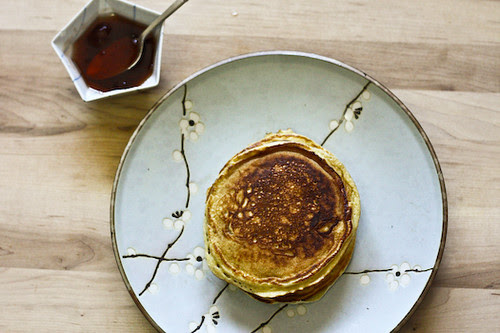 You know, there aren't that many recipes that R gets truly excited about (hardly any of mine, I've noticed, but he's stoic like that.) Three exceptions that I can think of on the spot are his mother's komler, his mother's kvæfjordkaka, and these, his mother's lapper (I'm sensing a pattern). Not far from American pancakes, closer, in fact, than what Norwegians actually consider to be pancakes, these are like the best buttermilk flapjacks you've had. In R's family, they tend to use Kefir, a probiotic fermented milk drink that can be found in Turkish stores. (This is the brand we found and used.) If you can't find kefir, you can certainly use buttermilk, but our discovery of the drink in a local Turkish shop precipitated our making the recipe in the first place. 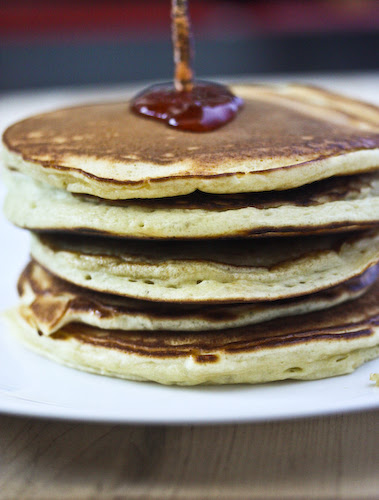 If you want to be authentic about this, you'll serve these with jam rather than syrup. And you won't eat them for breakfast. Maybe you'll invite a friend over to get out of the rain and drink some tea and eat some lapper. This recipe certainly makes enough for a small army, so there should be plenty to go around.

Dissolve the baking soda in the kefir and set aside. Combine the eggs, sugar, salt, baking soda dissolved in Kefir and sour cream (if using) in a large bowl. Sift the flour into the bowl, then mix gently until the flour is combined. Be careful not to overmix.

Grease a a large pan or skillet with a little bit of butter, then heat over medium. Pour in about 1/4 cup portions onto the skillet. The pancake is ready to turn when bubbles begin to burst on the surface. Flip, and cook for a bit less time on the second side than on the first. If you want to be authentic, serve with jam rather than syrup.
Email Post
Labels: family recipe

Rosalind said…
I can't get over how gorgeous these are. I have a special place in my heart for classic Scandinavian food.

I'd love it if you would check out and follow my blog! It's titled "Peasant Girl". It's my journey exploring the way American women value food and how we can be better served by a more traditional approach to eating and meals.

Anonymous said…
You can also eat them with thick honey, which is very nice. Do you also make real Norske panekaker? Or do you prefer the lapper? Because I have to say (with apologies to R),I think that real pancakes (our thin kind that you have for supper) are far better! :)
April 6, 2010 at 2:05 PM

Andrea said…
Fiveandspice, actually R agrees with you. We'll have to make some panekaker in the near future! Especially the kind with bacon!
April 6, 2010 at 8:48 PM

Cucee Sprouts said…
Very good looking blog. I love black and white pattern! I also like your post. I want to mention that you can also make your own kefir at home: easy and cheap. Here is my recipe if you are interested http://cuceesprouts.com/2010/10/fermenting-experimenting/
October 8, 2010 at 7:58 AM

Unknown said…
I had lapper at a relative's house on the island of Kvitsoy off the coast of Stavanger. She served them with crem fraiche and jam. Amazing. After looking around for a good recipe to recreate this treat from our trip to Norway, I decided to follow yours because it looks the most authentic to hers. Thanks so much!
November 17, 2012 at 11:37 PM