First, I hope if you live in or are from the US, you had a very happy Thanksgiving yesterday. I hope your day was full of food, and that you're still recovering. I hope you didn't mind that I didn't bring you yet another turkey or cranberry sauce recipe in the lead-up. But my T-gives (as my sister calls the holiday) was a little different than normal. For one thing, there was only two of us to feed, R and myself. R had to work, and didn't even get home until 9:00 in the evening. But I was determined that we'd feast nonetheless. 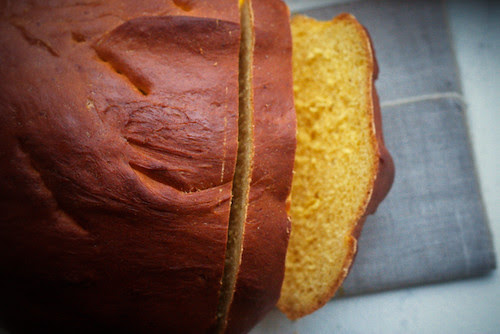 I'll post the entire meal bit by bit over the next few days, but I thought I'd start with this pumpkin yeast bread in case you have leftover, say, turkey in need of some good sandwich bread. Or if you happen to have some leftover pureed pumpkin after all of that pie-making. 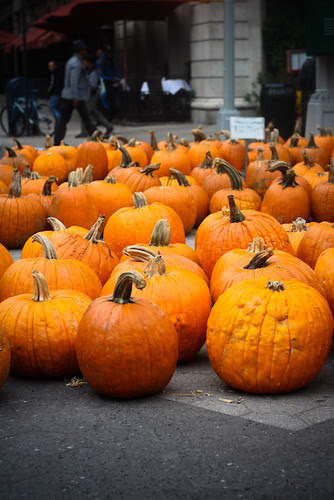 I began searching out a yeasted pumpkin bread after buying a loaf from Gourmet Garage the other week and decimating it almost single-handedly in under three days. This recipe, from King Arthur Flour, was one of the only ones I found. It received rave reviews, but if I'm going to be honest, I thought the pumpkin really receded in this bread, and it was nowhere near as spiced as I would have like. Better for sandwiches than for snacking, I think. Or for receiving a good drizzle of honey. Nothing like homemade bread and honey. If I were to make it again (and I just might, because I still really love the idea), I'd probably go so far as to double the spices. Maybe I'd add some garam marsala to the mix, with its warming fragrance, and maybe some cloves. You know, spice it almost like an exotic gingerbread. 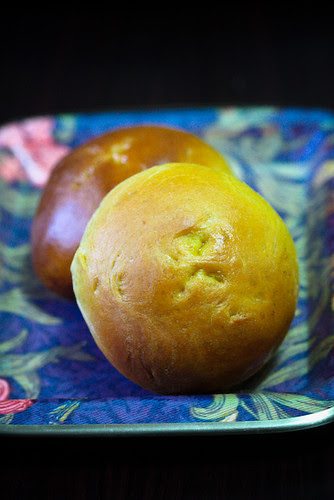 While I wasn't exactly overwhelmed, R loved the little pumpkin dinner rolls I served with our meal. The recipe is large enough that you can divide the dough in half and make two loaves, or one loaf and a dozen rolls. I'll admit that this bread does play second-fiddle quite nicely, sopping up leftover cranberry sauce, perhaps. Which is why I'm suggesting it for the gourmet leftover sandwiches I'm sure you're going to be creating. 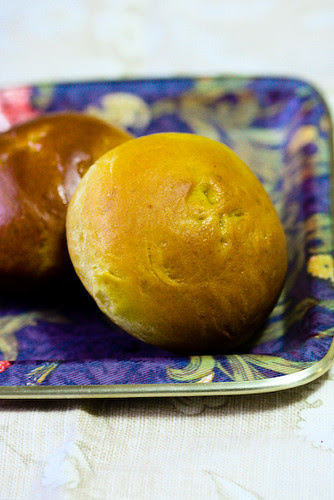 If you decide on the rolls, I've written before about a good technique for forming them. If you're going with loaves, King Arthur suggests a 10x15 inch pan, which I don't have. So I decided to make my loaf free-form, and that was just as good. Don't worry about equipment for this one.

Switch to the bread hook at this point, unless you plan to kneed by hand. Gradually add the remaining flour, a bit at a time, and mix into the dough until it is stiff enough to kneed. You can turn it out onto a floured surface to kneed by hand, or you can continue with the dough hook. Kneed until you have a smooth, elastic ball of dough.

Turn the dough out into a large, oiled bowl and turn the dough over so that it gets coated in the oil on all sides. Cover with a clean dish towel and put in a warm place to rise until doubled in size, about 1 hour.

After the dough has risen, turn it back out onto a floured surface and punch it down. Divide the dough in half and form into either two loaves, or into one loaf and about a dozen rolls. Place the loaves and rolls on greased baking sheets, cover, and allow to rise until just about doubled again, about 45 more minutes. Preheat the oven to 375 F.

When the dough is mostly risen, bake it for about 30 minutes for loaves and 20 minutes for rolls. Check early just in case, since everyone's oven is different. When done, they will be brown on the bottom and sound hollow when tapped.

Remove the bread from the oven and cool on a wire rack to room temperature before slicing in.