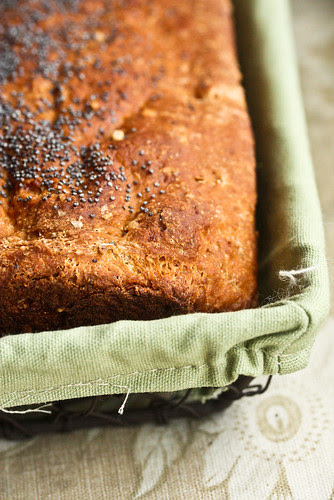 If you're like me, you rue those electronic e-readers not necessarily because you're sentimentally attached to the physical book (although there is that as well), but because they make it a lot harder to surreptitiously see what people are reading on the subway. If you're a can't-mind-your-own-business kind of subway rider like I am, and if you'd been sitting next to me on the six train the other week, you would have seen me nose-deep in Peter Reinhart's (of The Bread Baker's Apprentice fame) first book, a slim little paperback called Brother Juniper's Bread Book: Slow Rise as Method and Metaphor. And if you were a member of the general population, you would probably have thought 'what a weird girl.' What can I say. I do my best reading on the subway.

The book, as I mentioned Reinhart's first, is from an era in which he was known as Brother Peter Reinhart because of his membership in the Christ the Saviour Brotherhood. He founded the famous, but now sadly defunct Brother Juniper's Bakery in Forestville, California with his wife in 1986, as an offshoot of the Brother Juniper's Restaurants run by the brotherhood. Bread quickly became the focus of the bakery, and by Reinhart's own admission this unique, and until them somewhat forgotten Struan, became a major draw. 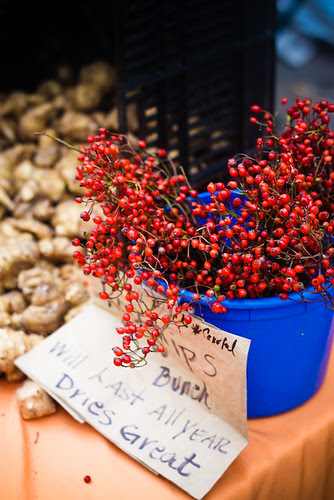 While each chapter of the book is dedicate to a musing on some aspect of bread-making followed by a recipe (with titles like 'A Note on Yeast and Salt' and 'On Not Cutting into Bread Too Soon'), part one ends with a chapter called 'And Then There Was Struan,' as though the mere mention of the bread says it all. According to Reinhart, Struan is a Scottish harvest bread, made of all the various grains gathered in the autumn. It also makes the most fabulous toast, and would go smashingly alongside a bowl of autumn soup. As a measure of how good it is, this recipe makes three loaves and R had the brilliant idea of freezing two of them. No sooner where they chilled than we had polished off the first and were ready to rip into the second. And then the third. It's slightly sweet with brown sugar, moistened with buttermilk and chewy with a slew of different grains, none of which overpower.

I'm sending this to Susan for her weekly Yeastspotting. If you love bread, check it out.

Put the yeast in 4 tablespoons of lukewarm water and let it stand until it bubbles, if that's the kind of yeast you're using. In a large bowl, combine the flour, polenta, oats, sugar, bran, salt and yeast. Whisk together to mix. Add the brown rice, honey, buttermilk and one cup of water (leave aside the extra 1/2 cup for use while kneading). Squeeze the ingredients together with your hands until the dough comes together as a ball.

Sprinkle some flour on a clean surface and turn the dough out onto it. Clean out the bowl, dry it, and set aside. You'll have to knead this bread for about 12-15 minutes because of all the grains. It will lighten in color and stop looking like porridge as it comes together. The dough should be a bit tacky and light golden, but not sticky when you're done kneading.

Put the dough back in the now-clean mixing bowl and cover with a damp kitchen towel. Put the bowl in a warm place for the dough to rise until doubled in size. This should take about 1 hour.

Cut the dough into three equal sections and form into loaves. R wasn't here when I made this bread, so I don't have pictures of the process of forming the loaves. But if you're unsure of how to do it, this About page has instructions and pictures. The only thing is that while the instructions there say to roll the bread out with a pin, you can simply use the heels of your hands to push from the center of each section out to flatten it. Put each loaf into a greased bread pan that's 9" x 4 1/2" x 3", seam-side down.

Brush the tops of the loaves with the egg wash and shower them with the poppy seeds on top. Cover the loaves and allow them to rise until the dough mounds over the tops of the pans. Preheat the oven to 350F and bake for 45 minutes. The bread is done when it sounds hollow when tapped on the bottom and is a golden brown in the crust. Allow the bread to cool completely for 40 minutes before cutting into it, as it continues to cook even after being removed from the oven.

Jenné said…
Lovely post.
I agree with you, those e-readers take the fun out of seeing what others are reading on the subway.
January 12, 2011 at 6:27 AM

Anonymous said…
I like the sounds of this one! All the ingredients would mesh wonderfully. I'm playing with oats in my sourdough at the moment, so am on the look out for more recipes. Thank you :-)
January 14, 2011 at 9:55 PM

Sarah said…
I would dearly love to make 3 loaves of bread at once, but I have a tiny oven and only one rack in it. Sigh. But maybe I shall cut down the recipe. Hmm, I wonder if I can squeeze two loaves in side-by-side? I'll test it with the empty pans! Thanks for the recipe, which sounds amazing.
January 16, 2011 at 5:15 AM

Andrea said…
Sarah, I'm sure you can fit two pans in side by side. You could also do one in a pan and one larger loaf free-form instead of three. Or maybe you could give the third loaf a rise in the fridge, which will slow it down and give the other two a chance to bake before the third is ready! I know what you mean about a small oven. I can't wait to be able to use 'normal' sized baking sheets one day!
January 16, 2011 at 5:39 AM

Sarah said…
Andrea, I made this after our discussion and posted it today. Thanks for the encouragement. I cut the recipe down to two loaves and made it a whole wheat recipe as well.