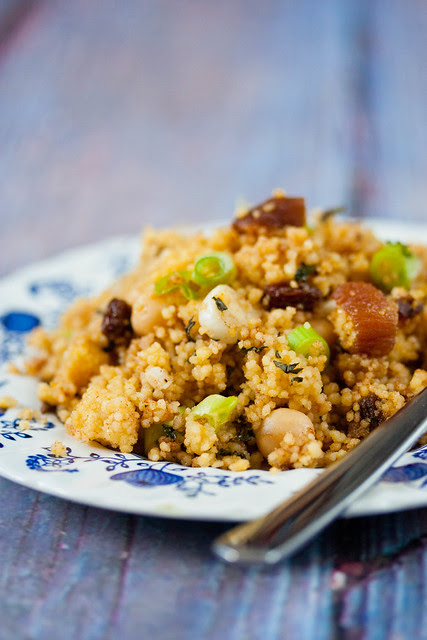 You might have noticed a slight trend around here these days. And that trend would be lunch. Big batches of make-ahead recipes that can be stretched over several days. And hardly ever a sandwich. It's not that I have anything against sandwiches...exactly. But I do have a big thing against soggy bread. Even bread soggy with peanut butter and jelly, or just kind of limp with lunch meat. Blech. If it's not made fresh, I'm probably not interested. It's a hold-over from childhood finickiness. 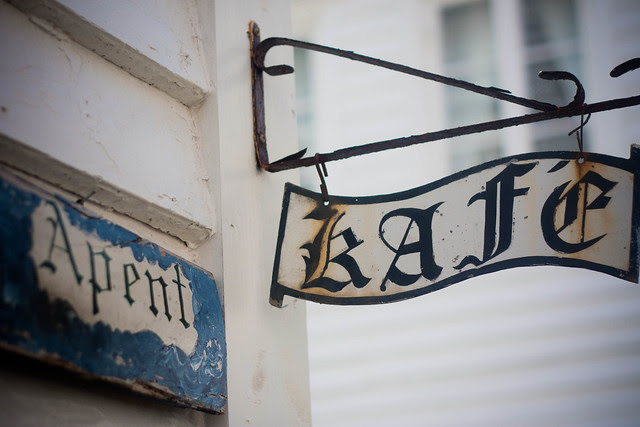 As a kid, my mom worked around my pickiness by essentially packing me deconstructed sandwiches. Swiss cheese rolled around slices of honey-cured ham and secured with a toothpick. Slices of tomatoes, cucumbers and mushrooms seasoned with a sprinkling of salt. A couple of mini bagels on the side. But what I find even easier in the morning is opening up my fridge, and scooping out spoonfuls of prepared grain salads into a travel container. Throw it in my bag, grab a piece of fruit, and lunch is done. 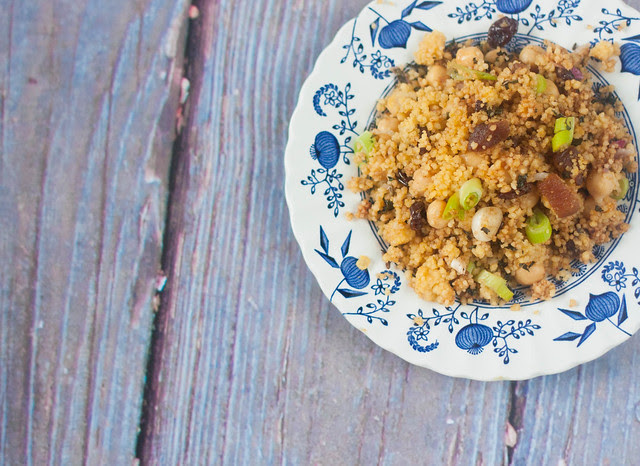 On another note, I've made lots and lots of vinaigrettes in my day, but this is the first one I've ever had that features cinnamon and requires a bit of cooking to coax the spices to dissolve. Full of flavor, I could eat this one for days. Oh wait, I have.

In a small, heavy saucepan, heat the canola oil, the cinnamon and the cumin until it just boils. Be careful not to burn the spices. Remove from the heat as soon as it bubbles and turns fragrant. Set aside.

In a large saucepan, bring the vegetable broth to a boil. Add the couscous and the dried fruit. Cover, turn the heat off, and allow the couscous to absorb the liquid, about 10 minutes. Put the couscous in a large bowl and run a fork through it to break up the grains. Set aside to cool as you prep the rest of the recipe.

Whisk the vinegar and the shallot into the cooled oil mixture and season to taste with salt and pepper. Toss the dressing with the couscous. Fold in the green onions, the beans and the mint. Serve.

Sashquatch said…
This is SO perfect you do not understand! I adore couscous, i have it pretty much every night with salad (just finished a big bowl in fact!) but am ashamed to admit I havnt found a recipe i like as much as the pre-made moroccan stuff from a supermarket. I really hope to give this a try as it would be lovely to be able to make it myself and i have everything already here hurrah! :)
July 17, 2011 at 9:12 PM

Koci said…
I'm with you--make ahead recipes are the best! Plus this recipe sounds so cool, especially with that cinnamon vinaigrette. Yum!
July 17, 2011 at 10:03 PM

Andrea said…
Procrastobaker, I love couscous too. But if you want the truth, although I really enjoyed this version, this orange and apricot couscous salad is still my favorite: http://cooking-books.blogspot.com/2009/02/orange-and-apricot-couscous.html
July 18, 2011 at 4:39 AM

Sashquatch said…
Thank you Andrea for visiting my blog and leaving such a lovely comment, and also for that recommendation! Its so nice to get an honest opinion and i will be sure to try out that couscous you suggested (and maybe this one too!) Although i do not own red wine vinegar, i could of course buy some but i was wondering if there might be a suitable substitution? Thank you again :)
July 18, 2011 at 10:47 AM

Anonymous said…
This looks wonderful, Andrea! I love couscous and this sounds wonderful!

Thank you for visiting my blog and checking out the lavender cookies! I was so happy to see your comment! :)

Andrea said…
Procrastobaker, you can sub in just straight red wine, or mix in a bit of white vinegar with the red wine. Both should work just fine. Enjoy!
July 18, 2011 at 11:08 PM

Heidi @ Food Doodles said…
That looks delicious! I've been craving couscous lately and I love recipes that can sit in the fridge to be eaten at any given time especially when it's hot out. Awesome!
July 19, 2011 at 4:11 AM

Anonymous said…
yummm looks so delicious! i'll be making it with pan-seared pork for my host mom on tuesday. she's never had couscous before but she's always wanted to try it, so she bought a bunch for me to use up. :)
October 30, 2011 at 9:12 PM

Subing said…
Procrastobaker, you can sub in just directly red-colored wine, or blend in a very little bit of light vinegar using the red-colored wine. equally ought to perform just fine
January 15, 2012 at 6:16 AM

Mahmudul Hasan said…
Lovely recipe and lovely tutorial as well.Nice share.keep up share that we can get more like this one.
Couscous recipes
January 27, 2013 at 9:49 AM