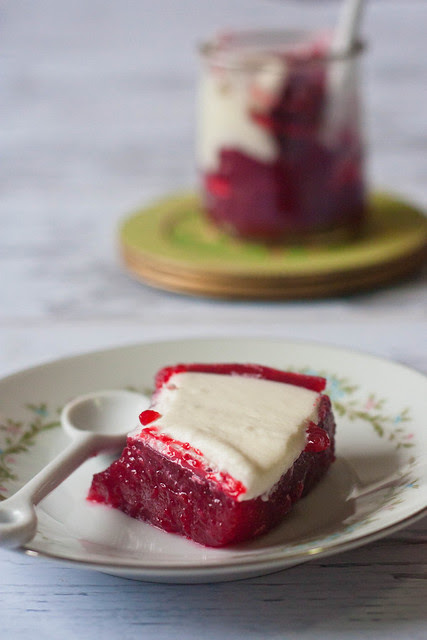 In this, the second post in my review of the new cookbook Gudrun's Kitchen: Recipes from a Norwegian Family (the first post, with more specific information on the book, can be found here), I have to admit right upfront that I committed the cardinal sin of cookbook reviews.  I made a fundamental substitution which certainly changed the final dessert. 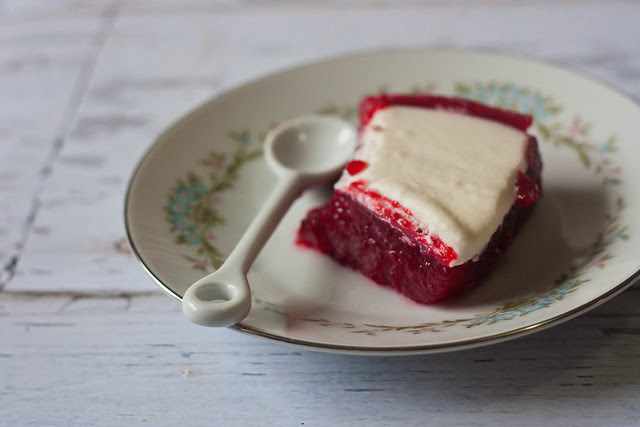 But, you see, I had my heart set on this recipe.  A pudding made of stewed red fruit, thickened with a little cornstarch and crowned with billowy whipped cream.  The problem was that I just could not, despite my best efforts, find red currents: fresh or frozen.  So in a moment of bravado, I substituted cranberries, which is not such a far-out move.  For one thing, they're sweet-tart, just like red currents.  They're red, they grow in Norway (where they're called tranebær) and this is precisely the moment when they're available thanks to the holiday season. 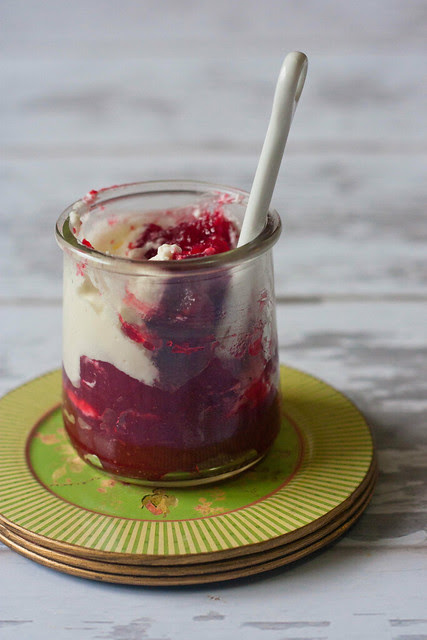 It's meant to be served in glasses, but I poured mine into a large souffle pan.  After a stay in the refrigerator overnight, the pudding had firmed up enough to be cut with a knife into pretty little slices with a layer of whipped cream on top.  However, if you serve it closer to when you make it the consistency is more pudding-like and it can be layered into a glass for spooning.  I actually quite liked it with the cranberries, but am definitely planning on making it again next summer when red currents come back into season.  I'd imagine that you could use the same technique on a whole slew of fruits if you're willing to travel a bit from the original recipe.  Strawberries and rhubarb both come to mind, since they would maintain the beautiful jewel-like red that makes the pudding such a stunner.

This is the pudding that Erik and Quinn loved so much, and after eating it they enjoyed sticking out their red tongues.  Our father asked the grocery store to stock Junket Danish Pudding, but we can no longer fin Junket Danish Pudding or any other brand in the grocery store.  Luckily, this recipe doesn't take too long to prepare.
If fresh fruit is unavailable, use canned or frozen raspberries and currants.  Don't forget to allow enough time for the pudding to chill and set.  Serves 5 to 6, with sweetened whipped cream.

Combine fruit, sugar, salt, and cinnamon with 1/2 cup water and cook in a covered pan over medium-high heat for 15 to 20 minutes.  Allow mixture to cool, then strain fruit carefully to remove the seeds, reserving the juice.  Return juice to heat.  In a separate bowl, stir remaining 1/2 cup water into the potato flour or cornstarch to make a smooth paste.  Add paste to the hot juice and stir constantly until the pudding is thick.  Pour into sherbert glasses or a glass bowl and allow to chill thoroughly.

Tora said…
Tranebær certainly is the norwegian word for cranberries!

Andrea said…
Anonymous, could it be in the cuisines of both countries? After all, Norway and Denmark were in a union for 400 years. Either way, my hat off to both cultures since this pudding rocks!

Tora, thanks for writing "Tranebær" out! I could not figure out how to make the "æ" on blogger, so I pasted the word into the post from your comment.
January 9, 2012 at 2:40 PM

Alli said…
Those Norwegians, always trying to claim Danish food as there own. Ha ha, I'm totally joking, I think this is a popular dish all over Scandinavia. Love finding someone as in love with Northern Europe as I am!
May 9, 2012 at 7:06 PM

Sonia Monagheddu said…
Hi, I’m Sonia, italian food blogger sorry for my bad english, I want tell you that I have included the link of this recipe (which I liked very much) in the section on my blog dedicated to “10 ways to make” (“10 Modi di Fare”) pudding.
The post is ‘Pudding al cioccolato e caffè’,
I hope not to bother you, have a nice day.
Sonia
February 8, 2013 at 4:59 PM